By Philip Timothy
For The Town Talk

Friday afternoon at the event’s weigh-in it was evident this fledgling tournament has definitely leaped past the baby step stage and gone straight into a dead sprint.

“Amazing,” said Dan Touchet, former ALBC president and the driving force behind the establishment of the high school division. “Would you just look at all these people – the kids, the adult sponsors and their parents.”

In just its second year of existence, the tournament has made a huge leap forward in both attendance and popularity.

“I’m definitely encouraged by the numbers,” said Craig Lewis, tournament director. “I am thoroughly impressed with today’s turnout and I believe these numbers are only going to grow as word continues to spread.

“And I think next year if the schools in the southern part of the state or the northeast part of the state join, our numbers could double … maybe even triple,” said Lewis. “Sponsors are jumping on board because they realize how fast this event is growing.”

Lewis said bass clubs are perfect for all those kids that don’t play football, basketball or baseball but want to compete in a high school sport.

“Schools are very willing to embrace bass clubs,” Lewis said, “because it allows these kids to participate in a sport they are good at doing. A lot of these kids have been fishing for most of their young lives and bass fishing appeals to them.”

While Lewis has spent a lot of time promoting these bass clubs to the schools, the kids themselves have taken over spreading the word.

“The competition between schools is a natural, especially the schools around central Louisiana,” he said. “They know each other and some even fish together. So, there is a lot of good nature give and take, and a little bragging to the winner.”

“We spread out. One team fished the San Miguel flats (Patroon Bayou) and the other two teams went south,” said NCHS team captain John Linger. “The two teams who went south ran into a number of Elite Series fishermen who were fishing in the Bassmaster Elite Series out Cypress Bend.

“We didn’t start catching fish until around lunch but the other two boats caught most of their fish early in the morning on top water baits,” Linger said. “We all caught quite a few fish but we finished with 20 keepers. My partner and I had six of those keepers and the other two boats combined for about 14 more. It enabled us to cull to get our 12 weigh fish.”

Teammate Brenton Lester, who caught the biggest bass amongst the three boats, said he was using a 5X crank bait when he snagged a big female bass.

“I called for the net but it was broken,” he said. “I was nervous it might get off without the net.”

And the bass almost succeeded as it gave Lester a run for his money before he was finally able to get his prize into the boat with the help of his partner.

“It got my line tangled up in the trolling motor, went under the boat and shot to the back of the boat. It took me almost six minutes before Nick (Nicholas Wiggins) was finally able to lip it and get it into the boat,” Lester said.

“Listen closely to the totals as I call them out,” ALBC President Elray Bourdreaux told the crowd, “and you’ll see just how competitive it was to get into the Top 10. All that separated many of these teams were tenths and hundredths of an ounce.”

The competition for Big Bass was equally tight as Menard’s Ashton Futrell took the honor by just one-hundreth of an ounce. The second biggest bass of the tournament was caught by a member of Tioga’s Team 1.

Futrell’s 5.44-pound lunker came as somewhat of a surprise to the 15-year-old.

“I was fishing a red watermelon-colored plastic Fluke worm. I had cast my bait into the water but I had to let it sit because I was working on the trolling motor. I got the trolling motor fixed and when I picked up my rod I saw the line was running off with it.”

Futrell, who was fishing on the Texas side in five to six feet of water, knew it was a good fish as soon as he set the hook.

“It made a little run but I managed to get it into the boat pretty quick,” said Futrell. “It was a good fish but I’ve caught bigger (9.5 pounds) here.” 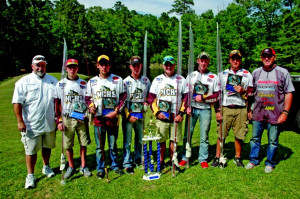